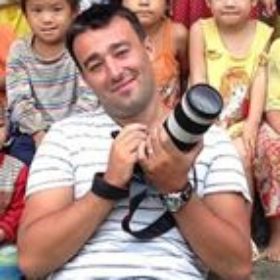 Réhahn is a photographer from Normandy, France, based in Hoi An, central Vietnam, since 2011. Led by his love of travelling and meeting people, he has visited more than 35 countries prior to making his home in the ancient town of Hoi An. He is particularly renowned for his portraits of  Vietnam, Cuba and India. The media regularly cites him as the Photographer who captures the souls of his models. Indeed, Réhahn spends time with the people he meets and builds a relationship with them before taking their photographs. Specialising in the ethnic groups of Vietnam, he travels the far reaches of this country on his motorbike in order to capture the latest images of these dying cultures.

INTERNATIONAL COVERAGE
Réhahn is undoubtedly one of the most featured photographers of the last 3 years. He collaborates with the National Geographic and Travel Live on a regular basis for the purchase of his photographs. Numerous articles have also been published in the international media such as the BBC, the Daily Mail, Los Angeles Times, Foto Digital, Travel Live, Conde Nast Traveler, Elle, Paris Match, Marie-Claire, Esquire, Geo… totalling more than 500 articles and interviews during these last 3 years (which also include 40 television appearances on the Vietnamese national channels).

The Photographer is also very active on social networks where he posts his photographs on a daily basis. His Facebook page is one of the most dynamic with more than 348,000 followers (as of March 2016).