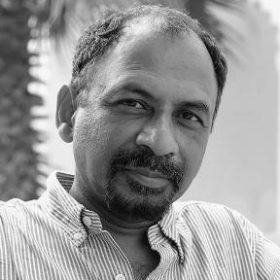 Ravi Agarwal is an artist, environmental activist, writer and curator. He has pursued an art practice integrally with his other pursuits. His earlier work, in the documentary oeuvre, encompasses ‘nature’, ‘work,’ ‘labour,’ and the ‘street.’ His current interest span questions around ecology and society, urban space and capital in interrelated ways. He works with photographs, video, and public art.

His work has been shown very widely internationally, including at Documenta XI, the  Sharjah Biennial (2013), and Indian Highway (2009) etc. He co-curated the Yamuna-Elbe, Indo German twin city  public art and ecology twin city project in 2011 New Delhi.  His work has been  written about extensively in publications such as the recent  Art Ecology Now, Andrew Brown, Thames and Hudson, UK, 2014,  Cities and Photography, Jane Thorny, (Routledge) 2013, Third Text,(Dec 2014) ed T.J Demos and Decolonizing Nature, Contemporary Art and Politics of Ecology, T.J.Demos, Sternberg Press (forthcoming 2016). He has recently been appointed co-curator of the Indo-German public art event to be held in Chennai, India by the Goethe Institute, in January 2017.

Ravi is also the founder of the  Indian environmental NGO Toxics Link which has pioneered work on waste and chemicals , and campaigns on conserving the river and the forest in Delhi. He serves on several high level government policy and standards committees, and writes extensively on sustainability issues in journals and books. He works and lives in New Delhi and is an engineer by training.